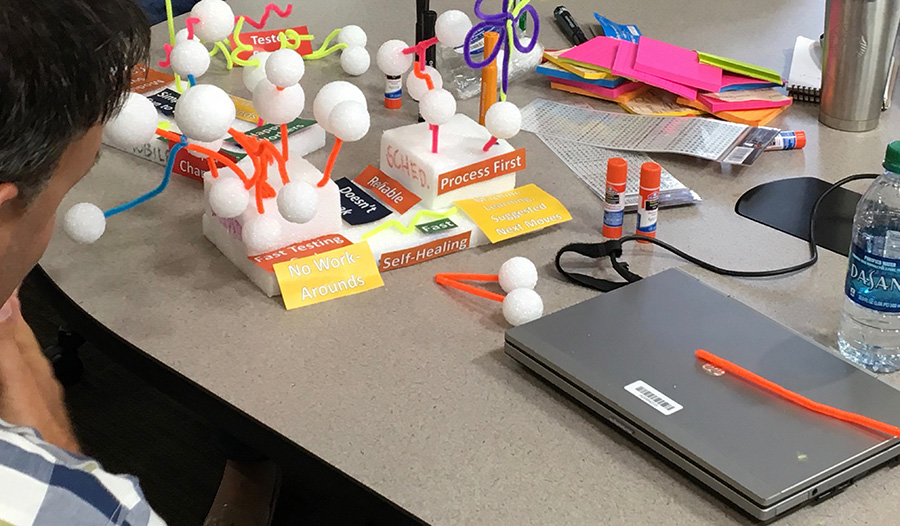 How do I explain Gamestorming? Well, it is not a particular something, but more of a collection of things that we can do; essentially a set of games we can play to squeeze out the BLAH that would otherwise be the result of your organization's latest all day workshop.

There are a couple of things to note here:

In Gamestorming (A Playbook for Innovators, Rulebreakers, and Changemakers) the authors (Dave Gray, Sunni Brown, and James Macanufo) explain that there is a very real process involved in the world of games, and it is not just for the sake of fun and, well, games. In fact, the results can be seriously phenomenal.

The authors tells us about the basic process of using games and discuss "the importance of opening and closing." They consider this concept to be "so important for managing energy and flow that it belongs on the essentials list....Like breathing, it underlies every activity, giving it rhythm and life." In the initial chapter of Gamestorming ("What Is a Game?"), the authors also clarify that the common game stages are "Opening (Divergent)," "Exploring (Emergent)," and "Closing (Convergent)." I found this to be a very helpful explanation, since it illustrates you must warm-up or set the stage for the work of the game, then do the work, which often takes you to places you might not have expected, and finally you must synthesize the fruits of your labor.

The authors take this one step further by gathering dozens of games that people have used in workshops in many different industries, over many decades, and they organize these games into "Games for Opening," "Games for Exploring," and "Games for Closing."  They also provide a category of "Core Games" that include fundamental techniques that many of have already used. These "games" can potentially be used across categories, depending on your objectives.

Let me give you an example of an all day workshop that I used to drive to the definition of Key Technology Solutions for the mission critical function of an organization:

So what did we accomplish in this all day Workshop? A group of Subject Matter Experts from across an organization got together and defined and prioritized the key Projects needed to support a mission critical function in a matter of hours. One of the participants told me that in a matter of 6 or so hours we had accomplished more than was accomplished by a large consulting -- engaged to proivde similar results -- that worked with his company for three months!