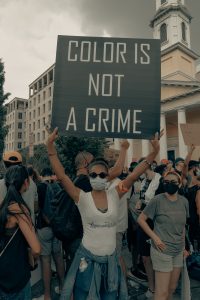 Photo by Clay Banks on Unsplash

In the The Fire Next Time (Baldwin, James, Vintage International, NY, 1962), the African-American writer James Baldwin asks: “how can one respect, let alone adopt, the values of a people who do not, on any level whatever, live the way they say they do, or the way they say they should?.” It is certainly a good question for these times, and as the U.S. Presidential election hangs in the balance as I sit here, it is a question I’d like to ask a whole group of people in these allegedly United States. This is a group of people, numbering upwards of 70 million in the U.S. alone (according to the voting records that keep ticking upward as absentee and mail-in ballots are counted) who seem to at least tacitly embrace racist, white-supremacist views.

In my previous GlobeBlog Post (The Fire This Time) I talked about the Environmental Crisis we are living through right now that is likely to get a lot worse, and about the changes we can make — especially as we envision the way we manage our future industries — to improve things for future generations. In this post, I want to continue this sort of discussion in another area of significant societal crisis that is actually a kind of non-disease based epidemic in the U.S. As depicted in a different publication also entitled The Fire This Time (not my post, but a collection of African-American prose and poetry, edited by Jesmyn Ward; The Fire This Time: A New Generation Speaks about Race, Scribner, NY, 2016), it is in many ways a real struggle for the healthful soul of our American experiment.

It sounds puzzling, but this struggle has landed squarely in our workplaces. A recent study by communications firm Edelman suggests for many Americans “…government is now not trusted to make the change…” that “….Black people as well as Whites and other communities…” are asserting must be made. This is interesting, because it speaks to a sort of societal wisdom that I didn’t realize existed in this country. A wisdom that articulates a very intuitive thesis: since work is what we do to live, and since it is the majority of our life focus (we prepare for a future of work through many years of schooling and then often struggle through many adult years to determine our vocation), then work should be one of the first places where real change should take place.

What has Government done to Address Systemic Racism In Our Modern Times?

Despite the seemingly intuitive approach I’ve mentioned above of focusing much of our societal change work within the workplace, there are many people who would say that the work that needs to be done to root out systemic racism needs to be driven by our governmental institutions.

So what has government done in 2020 to address systemic racism? Well, since the death of George Floyd, on the federal level, HR 7120: George Floyd Justice in Policing Act of 2020 passed the House of Representatives in late June, but the bill is unlikely to go anywhere in the U.S. Senate; meaning this was a largely symbolic effort for congress. It appears that, once again, the idea of reform in the House was considerably different from the idea of reform in the Senate, and it does not appear that there was much effort to bridge the gap between the two legislative bodies.

Other than a few municipal budget reductions for police funding, little else has been done to date by U.S. federal, state, and local governments to specifically address systemic racism.

Indeed, the Edelman study mentioned above asserts that in terms of combating systemic racism:

The Government is Failing—Only 36 percent say that government is hearing the call for racial justice. That is amazingly consistent for White, Black, Latinx and Asian American respondents. There is only slightly more trust in local government officials than federal officials as spokespeople (44 percent vs. 36 percent), again consistent among all four ethnic groups. There is a huge gap between White and Black respondents on trust in local police officials (52 percent vs. 34 percent).

So, perhaps, the argument that there is very little that government can (or will) do (at least in the current time horizon) about systemic racism seems to have some merit.

In terms of action by corporate organizations, Ken Stern writes in Vanity Fair that “At the root of corporate action on issues of racial equity is pressure from employees, especially younger ones. Companies are keenly aware that they’re fighting for talent in a competitive marketplace.” Stern further elaborates that:

Increasingly, being perceived as an employer of choice among younger, educated workers who comprise the core of the long-term job market is tied to reputation on diversity, inclusion, and activism on racial equity.

Stern also references the views of Victoria Sakal, of the data-intelligence company Morning Consult, which has been tracking attitudes on issues of racial equity for several years. Sakal states that in terms of actual corporate follow through on action “Gen Z is also the generation to say, ‘I will be paying attention to whether there’s follow-through and I will be thinking of this in both my purchases and in my decisions of where to work.’” Unfortunately that follow-through has, as we might expect, been an issue for many corporate organizations. Although Stern quotes Arisha Hatch, “the chief of campaigns for Color of Change” as stating that she is seeing a “‘sea change’ in how companies are approaching issues of racial justice and a new sense of obligation to move beyond rhetoric,” Hatch also mentions that a significant number of enterprises continue to engage in what she calls “purpose washing,” where corporations publish new Purpose Statements that appear to do very little other than minimize their corporate reputational risk.

As I write this, in early November of 2020, it remains unclear whether the idea that corporations can be a major catalyst in the fight to end systemic racism is really an idea that can go anywhere. The American Marketing Association (AMA) recently published a follow-up study tracking “Corporate America's Early Response to BLM.” The study concludes that “the majority of corporate America has done little or nothing to address the concerns of BLM and improve the lives of Black Americans who experience the hardship of racism every day….”

In the U.S., the long hard slog that is the pursuit of justice for all — a concept that Americans are told, beginning in grade school, is a fundamental, non-negotiable value baked into our society — continues. In the corporate realm we will have to work a lot harder if we are going to see any lasting improvements in the fight to end systemic racism.