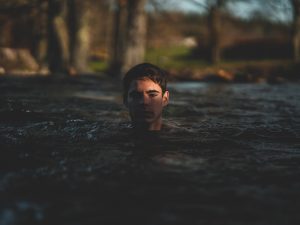 Photo by Darran Shen on Unsplash

I remember my wife, Amy, telling the story of her dad coaching her and her sisters in football (soccer to Americans, football to the rest of the world, because, you know, you use your feet). This was in the 1970’s before there was much knowledge of this other kind of football in the US. Since Amy’s dad had five daughters, no sons, and had emigrated in the 1950’s from Liverpool, England — where you must love your football! — he was going to coach girl’s “soccer” and that was all there was to it.

It really struck me when Amy was telling this story that the young girls ( in the eight to nine year old range) would inevitably get knocked over, falling hard into the parched, dry grass of whatever southern California park they were playing at. When this happened, his advise to them was simply: “get up, you’re not hurt.” This seemed like great advice until one girl did not get up at all, and upon closer adult inspection, had a broken bone protruding from her skin.

Despite that one incident, it always seemed to me to be a great thing to teach the girls: life is often like a game where you get knocked down and you just have to get up.

In Ray Dalio’s Principles (2017, Simon & Schuster, New York, NY) we find the life story of one of the world’s most successful entrepreneurs, but much more importantly, we find his really well articulated principle (one of many) that life is not really designed to be easy. The fundamental way of the universe is to “struggle well” as Dalio puts it:

In my early years I looked up to extraordinarily successful people, thinking that they were successful because they were extraordinary. After I got to know such people personally, I realized that all of them — like me, like everyone — make mistakes, struggle with their weaknesses, and don’t feel that they are particularly special or great. They are no happier than the rest of us, and they struggle just as much or more than average folks….the satisfaction of success doesn’t come from achieving your goals, but from struggling well….Since life brings both ups and downs, struggling well doesn’t just make your ups better; it makes your downs less bad. I am still struggling and I will until I die….

So how do we struggle well? Dalio has a principle for that, too:

In a sense, this is like a simple, generic, and yet extremely effective Agile methodology definition, isn’t it?

And when diagnosing problems:

Go back before you go forward. Replay the story of where you have been...that led up to where you are now, (and then) think of your plan as being like a movie script in that you visualize who will do what through time.

When executing your plan, “push through to completion”:

Great planners who don’t execute their plans go nowhere….It’s important to remember the connections between your tasks and the goals they are meant to achieve. When you feel yourself losing sight of that, stop and ask yourself “why?”

The above is what Dalio suggests for each problem you face. After moving through this cycle with one problem, you’ll run into another problem, and the cycle must be repeated, which, I suppose, is where Dalio’s phrase “struggling well” comes from. I do think if you look back on your life somewhat objectively, you’ll agree this is simply the cycle of life. It is also a paradoxically positive cycle, in that what you learn from facing problems — as Dalio says “embrac(ing) reality and deal(ing) with it” — becomes part of your personal “evolution.”

One of the things I have learned over these many years of difficult consulting engagements, and other various and sundry projects, is the technique of pulling focus. This is a process I use to try and regain perspective and stay sane when sanity feels like nothing more than a remote possibility. Conceptually, this process is like what the director of a film does when she asks the cinematography guys to pull the focus back from a particular scene and show a broad landscape. This gives a view above and beyond whatever drama had been unfolding in the film. And this is what I try and practice doing as much as possible when I am seemingly trapped in the drama of a particular work situation. It allows me to regain my perspective.

Dalio recommends a similar process that he has described as “our uniquely human ability to look down from a higher level,” and, as he mentions, this process

…doesn’t apply just to understanding reality and the cause-effect relationships underlying it; is also applies to looking down on yourself and those around you. I call this ability to rise above your own and others’ circumstances and objectively look down on them “higher-level thinking.” Higher-level thinking gives you the ability to study and influence the cause-effect relationships at play in your life and use them to the outcomes you want.

All of this gets us back to where we really want to be: coming through our struggles, but also really maintaining a healthy perspective on them; and, most critically, seeing our own part in our struggles.

Gathering and Developing your Principles

This struggling, along with our continual efforts to regain perspective with problem after problem, means that we should gradually start to see that each new problem is not always that unique. As Dalio puts it: oh, “another one of those” problems — implying that we should begin to categorize our problems. This is where his argument for the development of Principles really does make sense for most of us: “Having good principles for dealing with the realities we encounter is the most important driver of how well we handle them.”

In Principles, Dalio spells out his “Life Principles” and “Work Principles,” but is careful to point out that everyone should develop their own principles that are unique to their particular personality and situation.

Having said that, I still believe that Dalio provides some very good examples of Principles that we could all apply to varying degrees. The following are a few examples that will hopefully seek to inspire all of us to develop our very own Principles:

Principles for your Life

Principles for Building and Evolving Your Machine