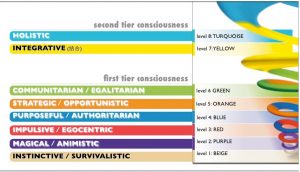 As we roll into 2017, I think most of us would agree that last year was a very different and yet illuminating year. With our recent Presidential Campaign circus, and the subsequent surprising election results, many of us  -- living in the little worlds that we inevitably live in -- have been struggling to understand what is happening in the wider world.

I readily admit, I have been at a loss to answer this question about what is going on right now in the wider world. I mean, what do Brexit, the US Presidential Election Results, Syria, and ISIS, say about all of humanity, not just our little world's realities?

These questions about the wide wide world -- sorry folks this is not the World Wide Web; not everything can be solved through computing or social media offerings -- naturally send us analytical types out on a search for some framework or model that explains, well, everything.

This is perhaps where Spiral Dynamics comes in: first written and published by Donald Edward Beck and Christopher Cowan in 1996, this theory on how everything fits together, is written in a slightly New Age style, but almost feels like it could have gone through its first drafts in the late 1970's (when the Spiral Dynamics concepts were first being conceived). Even with this slightly gruesome writing style to navigate through, Spiral Dynamics has a lot to offer those of us puzzled by recent events.

The Basic Concept of Spiral Dynamics is that although human history seems to repeat itself, seeming to circle back to prior human practices, the pendulum of cultural swings traces more of a spiral than a true circle. As William Butler Yeats would say our world is "Turning and turning in the widening gyre."

Specifically, the authors of Spiral Dynamics, Mr. Beck and Mr. Cowan, describe multiple states or stages within this "gyre": 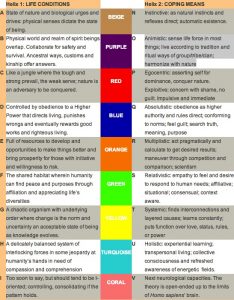 BEIGE (“Survivalistic”) -- Basic theme: Do what you must just to stay alive

RED (“Impulsive”) -- Basic theme: Be what you are and do what you want, regardless

ORANGE ("Achievist") -- Basic Theme: Act in your own self-interest by playing the game to win

GREEN ("Communitarian") -- Basic Theme: Seek peace within the inner self and explore, with others, the caring dimensions of community

YELLOW (“Integrative”) -- Basic Theme: Live fully and responsibly as what you are and learn to become

TURQUOISE ("Holistic") -- Basic Theme:  Experience the wholeness of existence through mind and spirit

CORAL, for these authors, is still unclear

As the authors of Spiral Dynamics point out "the central theme of Spiral Dynamics is that we are suffering...because we are missing the key mechanisms that impact human dynamics...." At the core of this statement is the recognition that -- as many of us are well aware -- real change is quite difficult, but it is also quite personal: the desire and capability to change is specific to people and formal and informal groups. In addition, the direction of change is extremely personal: one person's view that a change is a type of regression, can be in conflict with another person or group's view that change represents progress; and for some people, certain changes should have never happened in the first place, because there was no need to change from present conditions.

Mr. Beck and Mr. Cowan argue that there are "Six Conditions" required for change to occur, and these conditions apply in a very personal way to each and every person and group:

So where do we go from here in 2017? Perhaps, we can all learn a little bit more about this so-called "gyre" of change. It seems there is a lot for us to better understand about the world -- and here I mean the whole world -- in which we live. And then, as Tracy Chapman puts it in Change, once you have your own hopefully broader view of the state of the world, what would you change?

How bad, how good does it need to get,

How many losses, how much regret,

What chain reaction, what cause and effect?

Makes you turn around?

Makes you try to explain?

Makes you forgive and forget?